You are here
Home > Top Story > The way forward: rooting for our home-grown CBS 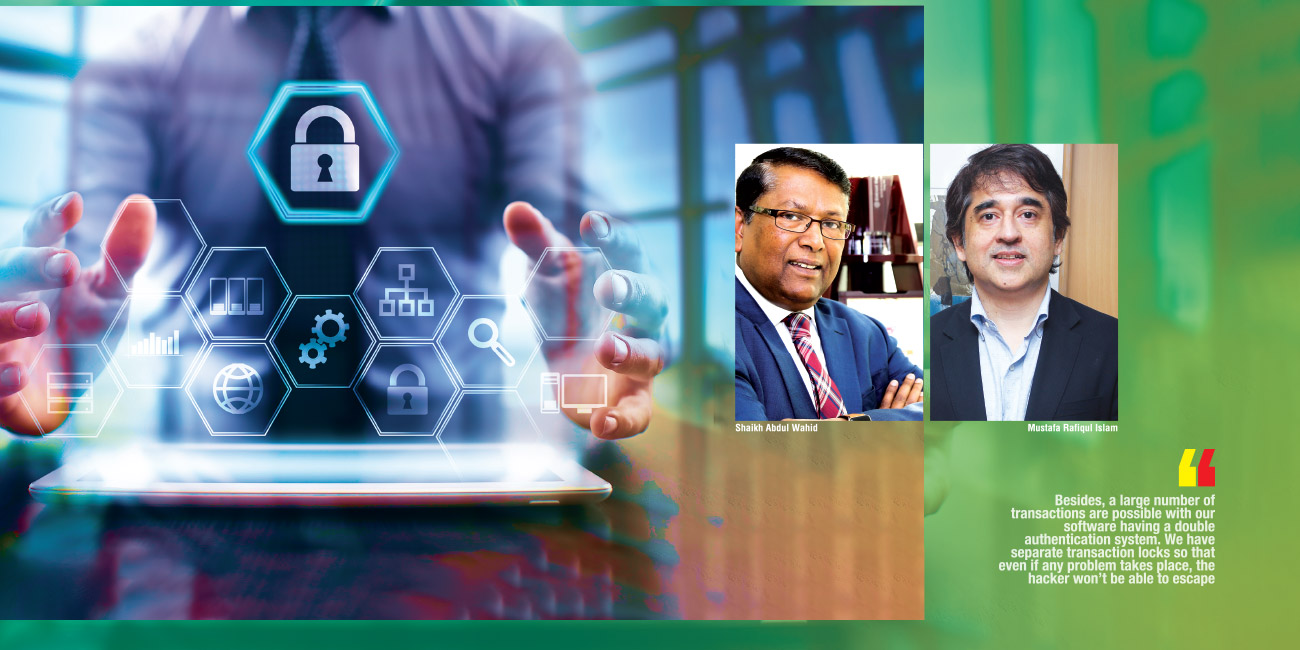 In the beginning of the last decade, banks in Bangladesh gradually started shifting from maintaining financial data in pages of manual ledgers to computer hard drives. The apparent ‘magic manager’ that helped them keeping together a mammoth and complex set of data amalgamation of banking ecosystem is the core banking software (CBS).

While a number of local commercial Bangladeshi banks have made a late entry into the world of CBS, surprisingly, two local software developing companies—Florabank and Leads Corporation—ventured into the daunting task of developing CBS quite a long time ago.

Their CBSs are now being used in more than 30 out of 57 commercial banks in Bangladesh.

“It was not an easy journey, setting up a software firm that designs CBS,” said Mostafa Rafiqul Islam, Managing Director of Florabank. “For developing large-scale software like CBS, you need to have a mindset, manpower and the capacity for investment,” he said.

Shaikh Abdul Wahid, Managing Director of Leads Corporation, said CBS is a huge thing for any bank, because the entire service of the bank depends on this application. “We have 10 local and one international banks, and another nine non-banking financial institutions. So, we are talking about 20 banks and NBFIs using our application. We have heavy duty on our hands.”

What is a core banking software?

As per pure definition ‘core banking’ refers to a centralized system established by a bank which allows its customers to conduct their business irrespective of the bank’s branch. Thus, it removes the impediments of geo-specific transactions. In fact, CORE is an acronym for “Centralized Online Real-time Exchange”, thus the bank’s branches can access applications from centralized data centers.

Other than retail banking customers, core banking is now also being extended to address the requirements of corporate clients and provide for a comprehensive banking solution.

Core banking solutions offer the following advantages to the bank:

• Errors due to multiple entries eradicated

• Seamless merging of back office data and self-service operations.

Customers find core banking advantageous since:
• The entire range of banking products including savings, deposit accounts, etc are available from any location
• Accessibility through multiple channels, including mobile banking and web
• Accurate, timely and actionable information about customer relations
• Single view between bank and customers
• Redefining the concept of ‘anywhere, anytime’ banking.

The journey of CBS

CBS underpins nearly every major banking process. It runs a bank’s central nervous system—the software and infrastructure that link services to business units, customers, and back-office functions. These systems not only drive the banks’ day-to-day operations but also serve as the core IT platform for new capabilities and growth.

Florabank`s MD Rafiqul Islam said developing a CBS is not every software company’s “cup of tea” as most software companies of our country are suffering from lack of employee retention.

“Most of the software engineers and programmers switch to other companies every two or three years. But developing a CBS takes four to five years, so if a programmer working in a CBS project leaves the company after one or two year, it creates a problem for the project.”

Rafiq said, since he himself is a programmer, he knows how programmers think. “I know what they want and what I need to give them so that they won’t leave my company. You see, programmers are a whole different breed. They don’t just work for money.”

“As a boss, if you don’t know their language, their jargons and the way they think, you will fail to earn their admiration. This is like an intellectual game and you have to be a proven leader to garner respect. I have that confidence and ability in myself to earn that respect and, hence, I am able to indulge in developing large-scale projects like developing CBS.”

It has been over 15 years since Rafiq started working with Florabnak software. In this long period, the team that he formed has deployed its locally developed CBSs in 1,000 branches in nine premier banks across the country. As of now, all the banks are running the software without any problem.

Meanwhile, Leads Corporation, which was formed after taking over the global giant NCR’s Bangladesh operation in 1992, started venturing into the CBS market in 1999.

“We decided to set up a separate company for software,” said Shaikh Wahid. “LEADS Corporation has two subsidiaries. The corporation is the parent company. It owns LeadSoft, which handles the software. It also owns Leads Training and Consulting.”

The advantage of local CBSs over foreign ones

Shaikh Wahid told Fintech that as far as the difference between foreign and local CBS is concern, he is confident that the local software is the best option for Bangladesh based customers if considered the quality, cost and after-sales services.

There are a few factors that we must know, said Wahid: first, any foreign CBS would cost at least six to seven times more compared to a local CBS. Second, a local CBS is fully compliant with Bangladesh Bank’s requirements. Third, local CBSs are supported by local companies and with their local resources.

“Therefore, it is easy for any customer to get quick and cost-effective support. On the other hand, the after-sales service of a foreign CBS depends on their structure, making it usually time-consuming and costly,” he said.

Lastly, Wahid said, “We must recognize that every year, this country produces many young talent and they must see their future in Bangladesh. If we continue patronizing foreign CBSs and other software, then I am afraid we will keep seeing a continuation of ‘brain drain’. This is an area of concern and immediate action must be taken.”

About the Florabank CBS, he said, it has a strong product configuration capability to launch innovative products such as deposit and loan product and SME loan products, if required.

“We also invest heavily to secure our products. Ensuring cyber security has become a big concern for the banks; so, we make sure that our products have the best possible security measure. Our product is based on the biometric security system. That means, if you want to log in, you will have to give your finger prints along with the serial number of the machine. Without these things, transaction is not possible.”

“Besides, a large number of transactions are possible with our software having a double authentication system. We have separate transaction locks so that even if any problem takes place, the hacker won’t be able to escape.”

Rafiq believes all the banks now have CBS to run their operations because they have realized at some point that, without giving customer real time, faster digitized service, they would lose their customers.

“However digitization doesn’t only mean having CBS, rather it is about customer on boarding, loan profiting and apprising of loan-all in digital manner. In a bid to do those, you have to digitalize the whole engine. The fact is, in future, no banker will work in any real branches.”