You are here
Home > Tech > Tech Talk > TOWER COMPANIES: A WAY FORWARD FOR THE TELCOS? 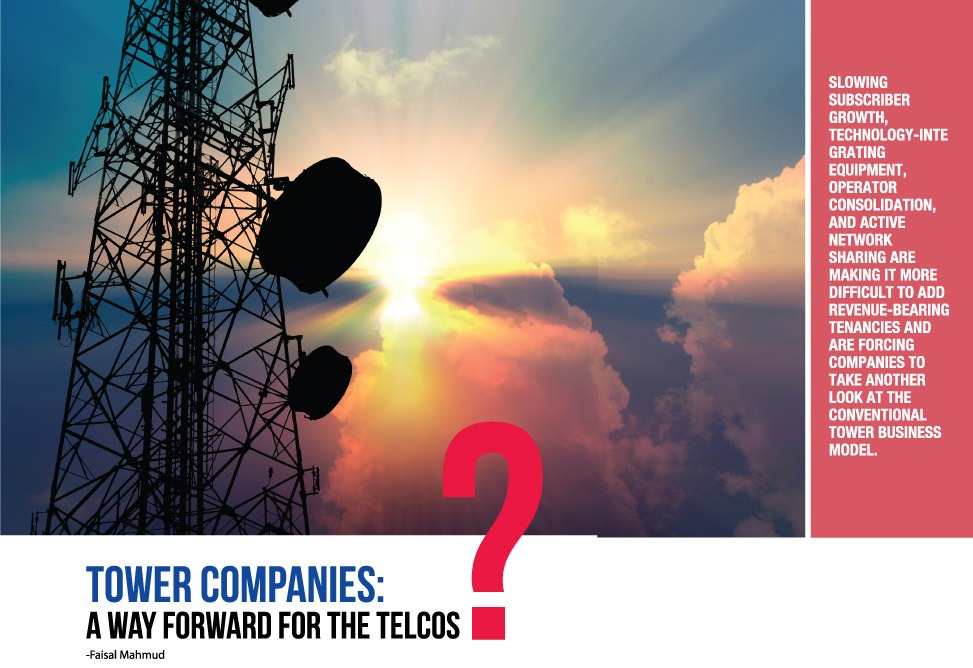 Tower management companies who build, own and operate network towers for various telcos, are a given in mature telecom markets but Bangladesh is getting to see their advantages only now as telcos overcome the initial concerns of sharing tower infrastructure with competitors.

Industry experts say telcos can slash operational costs by 50-60%, and sure enough; a slew of national and international companies are making a beeline into the nascent market. Realizing that, the telcos in Bangladesh now opt for sharing network towers because they realize if they can reduce operating costs, then they can concentrate more strongly on the quality of customer service.

But has it really been a success? Are tower companies creating value for their shareholders and their mobile operator clients? We need to look at the existing shared network tower market scenario to get a clear picture.

First, we need to look at the tower companies’ market in our neighboring India. India is a must case since inspired by the early success of tower companies in India, operators around the world are contemplating selling or spinning off their towers.

The Indian telecom sector saw a dramatic growth phase from the late 1990s to 2010. Because operators were focused on acquiring customers and expanding services in the midst of hyper-competitive pricing pressures, they started outsourcing network management, information technology, call centers and then tower infrastructure—all previously seen as core strategic activities.

In 2008, Quippo, an independent company with a small portfolio of towers shared by operators, acquired 1,000 sites from Spice Telecom, which later became Idea Cellular. In the same year, Bharti Airtel, Vodafone and Idea created the world’s largest tower company, Indus Towers, through a joint venture.

Tower sharing created a strong incentive in the Indian telecom market: It allowed operators to reduce costs considerably and focus on core marketing activities while enabling new operators to rollout networks in record times. For example, Tata DoCoMo rolled out 16,000 sites within a year with Viom.

However, hyper-competition in the mobile industry and the ongoing fallout from competitive and regulatory challenges over the past 12 months have put cost pressures on Indian tower companies. With around 365,000 towers, there is now an over-supply and growth has tapered off. As a result, Indian tower companies have begun to look for new growth avenues and focus more on operational improvements.

Meanwhile, In Indonesia, recent regulations have made tower sharing mandatory and an anticipation of increase in tenancies outside Java has been made (Population coverage outside the island of Java is limited). Data traffic is expected to grow by 50 percent per year for the next five years, fostering nationwide 3G deployment. This will drive an increase in tenancy ratios and new infill requirements in Java, and in some new sites outside of Java, provided they can be economically deployed to justify this expansion.

In Malaysia, population coverage (network) has reached 95 percent and operators have shared towers for some time now, both formally and informally. As site acquisition in major cities becomes more difficult, the focus is turning to mobile broadband and the required optimization of in-building coverage and small cell networks. Infrastructure sharing, consolidation, and optimization are the way leading operators are most likely to go. Interestingly, edotco, the tower management company which has tower management business in 5 countries across Asia and is a part of the Malaysia based Axiata Group, came to Bangladesh to grab the telecom tower market. The Malaysian company started its activities in Bangladesh with the BTRC’s (Bangladesh Telecommunication Regulatory Commission) ‘No Objection Certificate’ in September 2013, albeit on a limited scale. BTRC is now on the verge of providing licenses for tower business in this market. The final guideline is nearing approval.

The tower businesses are undergoing a fundamental transformation. For years, one dimension—tenancy ratio—has generally governed tower businesses. But as mobile markets mature, the number of operators a tower company has, is no longer a measure of success and may even be risky.

The new measure of success is site-level profitability. This means that operational excellence, somewhat overlooked in the past, is now an essential skill. As with managed services, the value of outsourcing is not just in sharing costs but in a specialist provider’s ability to manage costs and quality.

Tomorrow’s tower company will be more than a cost-sharing proposition; it will be a specialist provider of telecom network services with operational skills in energy management, operations, customized site planning and low-cost design. These companies will offer operators a clear and sustainable value proposition—especially attractive to companies with site rentals, power, and fuel that can account for 70 to 80 percent of network costs.

The economic reasons for mobile operators to spin off their tower operations will be difficult to ignore, with operational improvements dictating partner choices and construct, whether captive spinoff, management contract, or sale to a tower specialist or financial investors.

As the nature of the tower business shifts from growth to operational excellency, the opportunities to improve shareholder value will flourish. And with data traffic accelerating, the tower growth story is certainly not over.