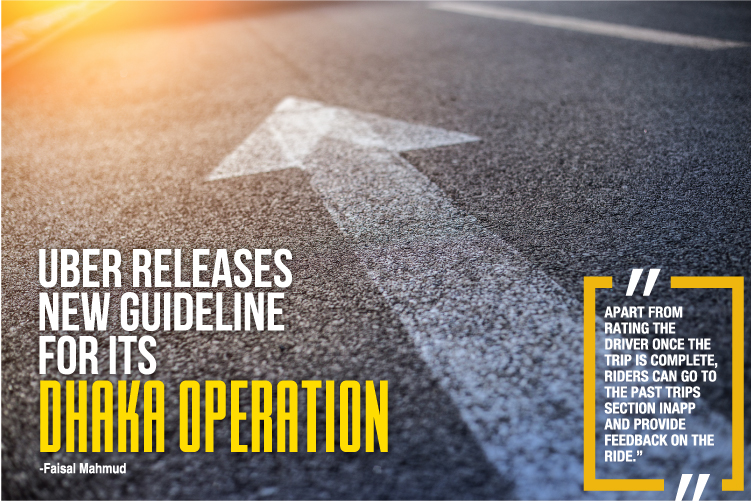 Ridesharing app Uber has released a new guideline for its Dhaka operation and integrated the national helpline number in its application this week to ensure better services for its increasing customer base in the capital.

After about 10 months of its operation in Dhaka, Uber has created the guideline both for its drivers and the commuters to effectively address the pile of complaints. Even though the‘fluid and functional’ app of the San-Francisco based tech giant has made its inroads into a huge number of smartphones of the Dhaka commuters, who, apparently exasperated with the capital’s piecemeal taxi service have wholeheartedly welcomed Uber; the complaints started racking up because of an absence of guideline.

High fares and charging of extra money, complaints as serious as of assault by Uber drivers have been lodged by the vexed commuters. Now that it has formulated one, any complaints or concern of the commuter should be dealt with properly,assured a spokesperson from the PR agency that looks after the communication of Uber’s Dhaka operation.

The spokesperson, however, said the guideline — ‘Community Guideline’–applies on both drivers and riders.The guideline explains the behavior expected from riders and drivers when using Uber and how drivers and riders can lose access to the service.Commuters’ complaint is just one side of the coin, there are internal complaints from drivers as well, who have withstood bad manners from the riders, said the spokesperson.

About respecting each other, the guideline has asked to “treat fellow riders and drivers as you would like to be treated yourself: with respect.It’s a common courtesy not to shout,swear or slam the car door. And by tidying up after yourself — whether it’s taking your trash home or cleaning up a spilled drink — you’ll keep the car in good condition and ensure the next person has a pleasant ride too.” On giving riders and drivers personal space, the guideline asked all to value personal space and privacy.

It said, “It’s OK to chat with other people in the car. But please commencement on someone’s appearance or ask whether they are single. As a passenger, if you need to make a phone call keep your voice down to avoid disturbing your driver or other riders. And don’t touch or flirt with other people in the car.” Emphasizing on safety, it said, everyone wants to get from A to B safely.

“Whether you’re in the front or the back seat, buckle up when you get into the car. Of course, drivers have a particular responsibility when it comes to safety at Uber,” said the guideline. The guideline also said that only adults can have an Uber rider account. “If your child is using your account, a parent or guardian must be with them at all times.”

In its guideline, it pointed out the importance of feedback. It said,“Whether you are a rider or driver,please rate your journey at the end of the trip. Honest feedback helps ensure that everyone is accountable for their behavior. This accountability creates a respectful, safe environment for both riders and drivers. And if something happens during a ride — whether it’s a traffic accident or an argument —make sure to report it by tapping“Help” in the app so that our custom-er support team can follow up.”

Incidentally, before releasing the Community Guideline on August 3,Uber on August 1, integrated the government’s helpline number in the app, which would prompt riders to dial 999 in case of an emergency,Calling 999 will connect the rider to the government’s control room where depending on the nature of the emergency situation, a caller can select ‘1’ for Ambulance; ‘2’ for fire service; ‘3’ for Police; or ‘0’ to speak directly with a government agent.

About the provision of including emergency helpline in Uber, Arpit Mundra, General Manager of Uber Dhaka said,”Safety of our riders is a priority for us at Uber. We a recommitted to make rides as safe as possible by leveraging technology.Uber’ s integration of the emergency number 999 is one such step from us highlighting our absolute commitment to safety at every step – before,during and after every ride.”

About the other safety measure of Uber, Uber office in Dhaka informed that it ensures safety in three steps-be-fore a ride, during a ride and after a ride. Firstly, to ensure a relatively safe, reliable and convenient travel from point A to point B, the Uber app gives one the ability to see the driver’s details in advance, including his name, photograph, make of car and the car registration number.

While on trip, riders can avail the benefit of GPS tracking and by using the share my status option, share their trip details with as many contacts on their phone book as they want. This allows for the people receiving the message to immediately track the route and location of the vehicle at any point in time during the trip.

Lastly, apart from rating the driver once the trip is complete, riders cango to the Past Trips section in app and provide feedback on the ride. Our round-the-clock in-app customer support is designed to further improve product and operations, with a co refocus to provide specialized support for critical incidents that require immediate attention, said the Uber spokesperson.■