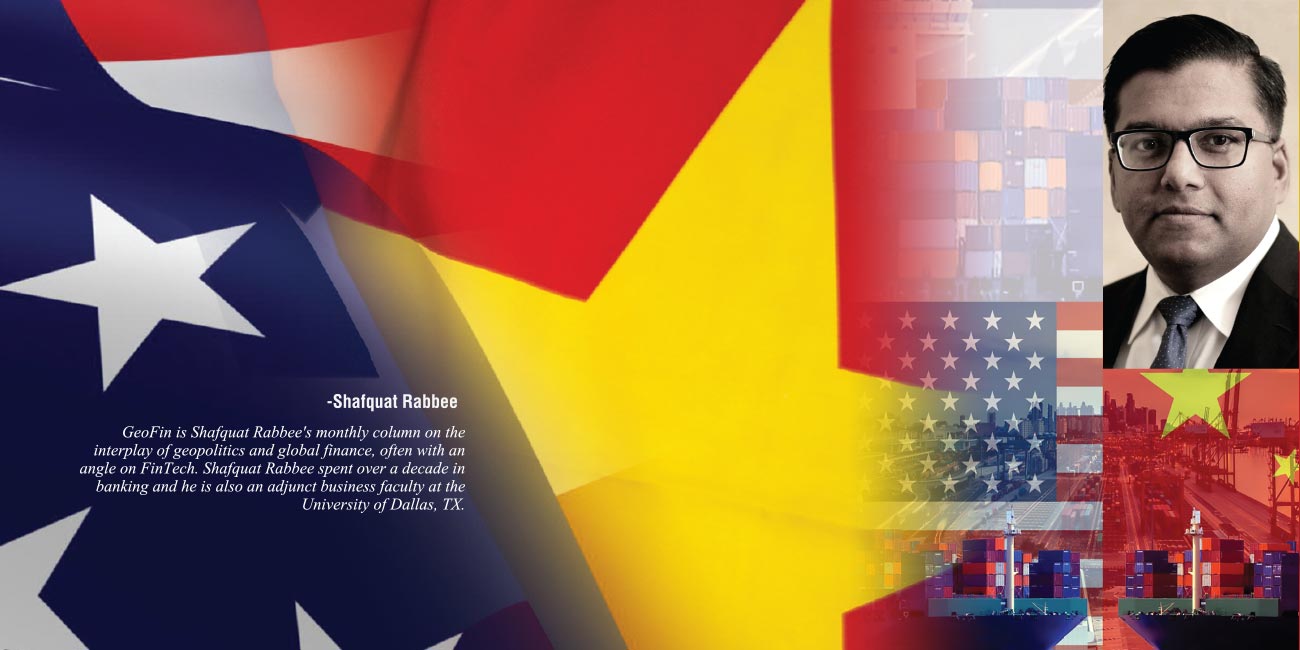 The US-China trade war is heating up with little signs of cooling off anytime soon. It is now likely that both the parties will engage in punitive measures against each other for the foreseeable future, which will go beyond just imposition of tariffs.

This, in turn, may disrupt current global trade practices, established around the tenet of the free flow of goods, labour, and services, from which both China and the US have benefited immensely. The trade war will be painful for both China and the US, and at the same time, it may produce opportunities for countries like Bangladesh, Vietnam, Cambodia, if these countries do not get entangled in the same trade war.

The Trump administration started imposing tariffs on Chinese goods starting first with a 25% tariff on $50 billion of imports and then later expanding that to $250 billion. China for its part initiated tit-for-tat tariffs on US exports to China.

The trade war is a byproduct of rising populist politics across the Western World, from Europe to North America. This populism is centered around the anger of the Western working class population who lost their manufacturing jobs during the 1990’s—the majority of those [jobs] going to China. This population is now aging without much of a shot left at acquiring newer skills relevant for getting employed by the higher paying and thriving service economy present in the West.

Street smart politicians like American president Donald Trump have utilized this anger to their advantage, as China-bashing became a popular sport in the American political arenas, particularly those in former manufacturing towns within America. This is a dynamics that is likely to reinforce itself over the next several years, easily transcending an election cycle or two.

To appease these angry voters, politicians like Trump will have little option but to take reactionary and punitive measures against China’s manufacturing supremacy, which has already resulted in a $400 billion Chinese trade surplus against the US per year. Trade surpluses occur when a country imports more goods than it exports to another country.

The sum—$400 billion is a staggering number in terms of trade surplus in favor of the Chinese. It is not possible for the US to ignore such figures forever, particularly not when China uses such trade advantage to put the United States and its allies in geopolitical quandaries; examples include but not limited to the South China Sea.

The trade surplus with the magnitude of $400 billion is not easy to reduce and certainly not easy during an economic boom that the US is currently experiencing. Therefore, if reducing the surplus is indeed the test, the US must continue its trade war for several years.

Given that most economic indicators in the United States are positive at the moment, with only 3.5% unemployment rate and a rising GDP, the Trump administration believes it is the right time to go after the Chinese on both trade-related complaints and other geopolitical issues. In a bid to keep the article’s focus solely on the trade scenario, I am, for now, keeping the geopolitical issues aside.

From the Chinese angle, in return for stopping its trade war, the US is demanding such concessions that China simply cannot provide without giving up its economic model dependent upon strong central planning and political stability under the authoritarian rule of the Chinese Communist Party.

China also lacks tools to force the US to quickly bring an end to the escalating trade war by punishing US exports or its business interests in China. For example, the US exports only 150 billion of goods to China, therefore, even if China retaliates with tariffs on 100% of the US exports, it will still not be able to match the larger punitive power of the United States.

China may try some surgical strikes against US agricultural products like Soybeans to create political pressure, given that the farming communities in the US are predominantly Donald Trump’s voting base. However, Trump can simply bail out farmers utilizing the additional revenue he will be collecting from tariffs imposed on Chinese imports.

In a nutshell, the trade war is here to stay for long enough time to bring major disruptions and with that, there will be opportunities for regional players. Now let’s discuss who those could be.

For avoiding newly imposed tariffs, Chinese manufacturers may decide to reduce the Chinese footprint in their produced goods by rerouting its manufacturing process through neighboring countries who are not under US tariffs.

This will be particularly beneficial for countries within China’s periphery, particularly Vietnam, with which China shares flat, land-based borders, without any tricky mountain terrains. Vietnam is also a major strategic ally for the US in its China-containment project, and therefore, it will be hard for the United States to impose similar tariffs to both China and Vietnam if Chinese manufacturers successfully route major manufacturing through Vietnam.

After Vietnam, Laos and Cambodia come next in the list of potential beneficiaries of the trade war. All these countries share relatively easy to traverse land based borders with China, and they are also geographically close to China’s manufacturing hubs in that country’s South East.

Such trends are already visible in the news. When America imposed tariffs on luxury handbags, Steve Madden, a major brand for handbags and shoes shifted their production to Cambodia from China. Vacuum cleaner giant Techtronic Industries, Flex, the company that makes hardware for major brands like Google and Bose, started to look for opportunities to shift manufacturing out of China to countries like Malaysia.

It is also true that even without the freshly started trade war between the US and China, global supply chain executives were already looking for alternatives to China, partly to mitigate any future political risks coming from inside China, and obviously due to rapidly rising manufacturing labor cost in the country. Rising labor costs have already caused major shifts in lower-end manufacturing from China to countries like Bangladesh, India, Cambodia, Vietnam, Pakistan, and several African nations.

However, if the Chinese experience taught the global supply chain anything that would be to never let another single country produce all of the world’s goods. Therefore, it is unlikely that any single country or region will become the “next China” as an aftermath of this trade war.

The trade war, therefore, is likely to increase the global need for a diverse pool of manufacturing hubs, which will create additional opportunities for countries already with sizeable manufacturing footprints.

Apple’s CEO Tim Cook in an interview made the case that Apple is not in China for cheap labor alone, Apple is in China because all the major electronics component suppliers are in China.

Due to the benefit of having component manufacturers in-house, known as the “backward-linkage” facilities, China still exports 35 percent of world’s ready-made-garments, whereas countries like Bangladesh or Vietnam exports 6 to 7 percent each. The trade war may change all of these dynamics.

Major corporations will now have the incentives to diversify not only the labor-intensive final manufacturing destinations but also the overall supply chain or backward linkage of components for the final produced goods. It will be true for electronics, as much as it will be true for ready-made-garments.

A significant portion of this diversification will obviously be achieved through quickly emerging technologies in automation, robotization, artificial intelligence, and fintech near the export destinations.

The rest will be done through old-fashioned means, with bulldozers, dirt trucks, and construction crews setting up newer factories in countries like Vietnam, Bangladesh, Cambodia, or Mexico — at the expense of the Chinese labor, but sometimes with Chinese investments.

China will be forced to play the role that developed economies played during the 1990s when they invested in China at the detriment to their own labour forces. China will play that same role, only in reverse.

To extract benefits out of this reversal of roles, countries like Bangladesh need to act quick and play it smart in managing both the Chinese and the West.