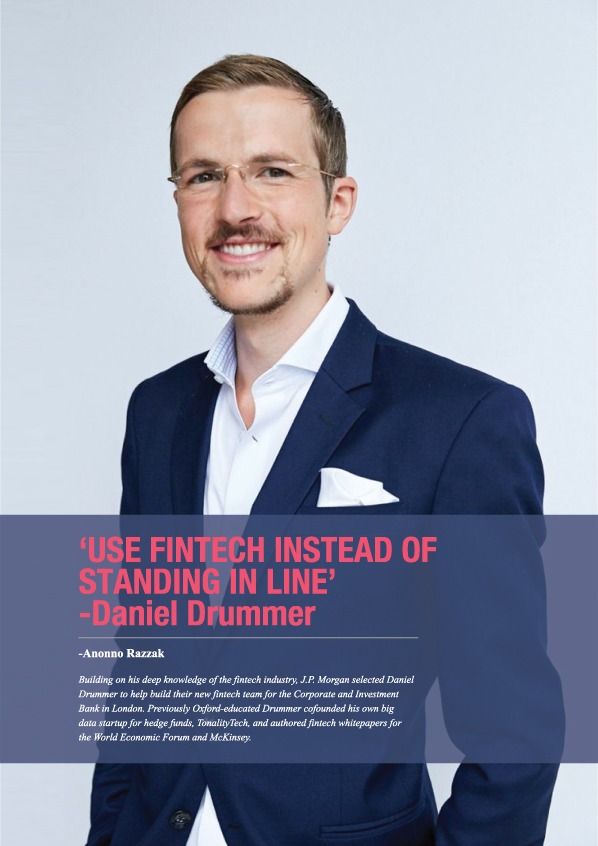 At a Tedx event in Basel, Switzerland in August last year, Daniel Drummer, the lanky fintech guru explained the beauty of money.

In front of an enthralled audience, Drummer explained why money-the most coveted yet a drab object to be discussed about-is actually a fascinating subject.

Drummer said that a global revolution has just started and it goes by the name of “Fintech”.

Fintech is a short form which refers financial technology. Explaining it, Drummer said that fintech basically means reinventing the whole way we deal with money. “It gives us the perspective to look at banking in a completely new way based on today’s technology”.

To make his point, Drummer asked for a volunteer from the audience. After he finds one, he told her ‘you actually don’t have to do anything. You’ve just earned 50 Swiss franc for participating here and I will get the money right away

Daniel thought for a while and then said slyly, ‘there’s only one problem I have realized that I didn’t bring enough cash with me this morning. So I need to walk to a nearest bank branch and get some money from the ATM and I will be back in a…..”

He heard a soft crescendo from the audience which sounded like booing. “No!! I know. It might get the audience bored. OK, I could also take out my laptop and send it to you from my online bank account but I also didn’t bring my Asus and it is Saturday today. So bank is closed anyway. So deal starts and you will get the money on Monday and probably get it by Thursday.”

He asked whether that was fine with the audience or not. The audience replied with nods, not all of them though.

He then depicted a scenario of future. He asked the audience to transport themselves into a visionary future world of fintech and he said, that world was not in distant future rather the elements of that world was very much existent in present times.

“In this world, both of us would own a revolutionary new powerful device called smartphone. And with this smartphone, I could send you the money right away here from the stage and you would have received it in a minute from now.”

“This is what fintech does.”

Drummer said that the advent of internet and smartphone have already reshaped and disrupted entire industries. “In travel, we now use booking.com and similar things; we don’t walk to the nearby travel agent office to book our stay. If you want to watch videos, we stream that online, through YouTube or Netflix, we don’t drive to the nearest video stores anymore to empower of some DVDs and take them home.”

“And by the way, if the younger folks in the audience wonder what video storage is, don’t worry. You have a wonderful device in your pocket. Just google.”

He however said that the same trend which has already been appeared in other industries has now also arrived in banking. “There are alternatives now. Numerous startups are providing these services and they often do it in faster, cheaper and in more convenient ways than the traditional banks.”

“So, when I share this truth with one of my friends’ weeks ago, if that alternative is cheaper, faster and more convenient, then why isn’t everybody using the service? I think she made a point there.” 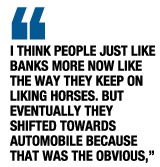 So, Drummer said, on the next week he asked this question to another of his friend who works for a fintech company in London. He replied me that he can gave me the answers by shedding light on the history of cars.

He told me that the automobile was invented back in 1887 but it took more than 30/40 years until they finally reached the majority of the cities although there were faster, in the long run- cheaper and more durable than those horse carriages but people just simply liked their horses more.

“I think people just like banks more now like the way they keep on liking horses. But eventually they shifted towards automobile because that was the obvious,” said my friend.

“So, now I ask a million dollar question. What do banks think about this new trend? Are they taking it seriously?”

“Silicon Valley is coming”. Those are the famous words of Jamie Dimon, CEO of JPMorgan Chase, one of the largest and probably most admired banks in the world. And what he meant was hundreds of startups were challenging those large and in the due process became a real challenge for them.”

So the mainstream banks decided not to ignore them or even to fight against them to death but to learn from them in some ways and in another ways even partner up to them.

“I want to leave you with this picture referring to the CEO of Deutsche Bank John Cryan who actually said and predicted even more radically, in ten years from now we won’t have any cash anymore.”