You are here
Home > Cover Story > ‘We developed the first tool that can predict late AMD, non- invasively’

An animated conversation with Alauddin Bhuiyan, Chief Scientist and CEO of iHealthScreen Inc.

Dr. Alauddin Bhuiyan is an inventor, innovator, computer scientist and with deep life science and medical technology expertise covering the spectrum of life science and med-tech. He is the founder of iHealthScreen Inc. and working for his company full-time. Before that, he was a faculty member in the department of Computer Science at New York University. He received the prestigious Endeavour Australia Award in 2014. He was a visiting scholar at Harvard Medical School

With salt and pepper hair and a calm demeneaur, Alaudding Bhuiyah has ‘scientist’ written all over him. His eyes however reflect compassion and when he speaks, he does that with surprising humility and humbleness, unlike conforming to the stereotypical image of a grumpy scientist. Bhuiyah recently came to Bangladesh and the Fintech team met him inside a noisy Dhaka café.

Over chicken cashew nut salads and cups of coffees, this scientist in his late 40’s conversed with us and shared bits and pieces of his life and his life’s work. Here is an excerpt of the conversation that we had.

Please tell us something about yourself. How did you start your career?

I had my schooling in Kumilla Jela School and later in Kumilla Victoria College. After finishing my higher secondary education, I went to Shahjalal University of Science and Technology in Sylhet. I studied Computer Science and Engineering there. Upon finishing the graduation, I joined there in the faculty as a lecturer. I worked there for four years.

In 2014, I received Endeavor Australia award and went to Harvard University of USA as a visiting scholar for a year. My research was on Glucoma prediction. I needed to use artificial intelligence and big data to predict disease.

How was your experience in the US research organization?

In terms of research, US organizations are always leading and showing the ways. Their research facilities are excellent.  I am not saying that Australia is a less superior country for research, but the way USA provides you with research grant, supports and options, it’s unparallel to anywhere in the world.

I worked in the Harvard University under Endeavor fellowship for a year. It was a very productive period. But as my contract under the fellowship mentioned that I had to get back to Asutralia after one year, I went back to Australia.

Later I went back to USA again and joined University of Virginia as a lecturer. In the mid-2015 and joined the New York University as an assistant professor. I worked in that capacity for the next two years.

When did you come up with the idea of forming your startup iHealthScreen.inc?

It came to my mind after I had a meeting with National Institute of Health (NIH) in USA. NIH is the the primary agency of the United States government responsible for biomedical and public health research. It was founded in the late 1870s, and is now part of the United States Department of Health and Human Services.

Back in Australia, my post doctoral supervisor who had his Phd from Jhon Hopkins University in the USA told me to pursue grants from NIH because in the scientific community, getting a grant for research from NIH is considered as very prestigious. So I started pursuing the grant from there.

In my meeting with the NIH, I told them that I wanted to work on macular degeneration and diabetic retinopathy. I shared some advanced idea with the official. Then they said if I formed a startup, then they could provide fund to that startup. With that idea in my mind, I formed the company in 2015.

Then I applied for the grant as a principal investigator (with Professor George Smith as my co-investigator) and at the end of 2015, I received the grant.

Can you tell us something about your research?

We are working on age-related macular degeneration (AMD). It can be taxing on patients and their caregivers. The burden might be eased if it were possible to tell which patients need careful monitoring, which patients may progress, or which could wait a longer between visits. To do so, we have developed through our research an automatic product for automatic screening and prediction for AMD.

We developed an image based prediction tool which can identify individuals at the risk of developing late AMD. Interestingly, this is the first tool that can predict late AMD, non- invasively.

Because the retina is an extension of the brain and shares many similarities with the brain, we believe that the deterioration in the retina may mirror the changes going on in the blood vessels in the brain, thereby offering a window into the disease process. The thing that you need to understand this window into the disease process is early detection device.

The early detection device developed by iHealthScreen is powered by artificial intelligence and machine learning, and is intended to be used by the healthcare providers through a telemedicine platform.

Our research team has developed this software tool for family physicians and optometry clinics to use during the yearly patient checkups to detect and prevent this vision threatening disease. The tool will be used to determine or screen whether an individual with intermediate AMD should be referred to an ophthalmologist for further review. Utilizing the software’s prediction capacities, the ophthalmologist then would decide whether or not to administer AREDS (age related eye disease study) supplements or further treatment to prevent the development of the late AMD.

Our AMD screening tool can accurately identify early or intermediate stages of AMD at greater than 98 percent precision. The prediction tool can identify an individual who will likely progress from intermediate to late AMD with 83 percent accuracy or above. 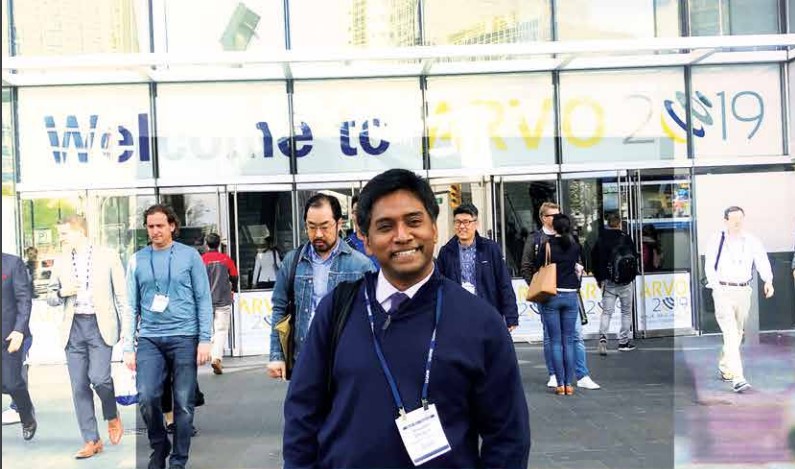 How does your device work?

To understand that, you first need to have an idea of how our eyes process images from the real world and how the functionaries of the eyes work in creating that image.

Vision begins with light passing through the cornea and the lens, which combine to produce a clear image of the visual world on a sheet of photoreceptors called the retina. As in a camera, the image on the retina is reversed: Objects above the center project to the lower part and vice versa. The information from the retina — in the form of electrical signals — is sent via the optic nerve to other parts of the brain, which ultimately process the image and allow us to see.

So perception or image processing requires various elements to be organized so that related ones are grouped together. This stems from the brain’s ability to group the parts of an image together and also to separate images from one another and from their individual backgrounds.

This image processing can be quantified and analyzed through computer modeling. In our device, we use a fundus camera to capture a patient’s high resolution retinal images. Those are then uploaded and analyzed by an intelligent AMD screening system deployed on cloud servers. Through fundus image analysis, the users receive a detailed disease level indication analysis delivered to their choice of device almost instantaneously.

What is your future plan?

I have a plan to get back to my university as a professor after seeing my company established and prospering. This is because I have a passion for teaching and academic research works. On the business front for my startup, I wish to get FDA approval for my device so that it can be used for diagnosing diabetic retinopathy, macular degeneration, stroke prediction and heart disease prediction. I also want to bring my company in the New York Stock Exchange.

I also have a long term plan which is conducting research on Alzheimer’s disease. Diagnosing Alzheimer’s is a challenge. Some techniques can detect signs of the disease but are impractical for screening millions of people: Brain scans are expensive and spinal taps have risks. Instead, the disease is often diagnosed through memory tests or observing behavioral changes. By the time these changes are noticed, the disease is advanced. Even though there is currently no cure, early diagnosis will allow researchers to study new medications earlier as future treatments may be more effective when given early. Earlier diagnosis would also give patients and their families time to plan for the future.

A new kind of precise and non-invasive imaging called optical coherence tomography angiography (OCTA) has assisted much of the recent research on the eye’s connection with Alzheimer’s. It enables physicians to see the smallest blood vessels in the back of the eye that are smaller than the width of a human hair.I have plans to do research on that.

Do you have any plan for Bangladesh?

Of course. I seriously want to come back to Bangladesh at some stage of my life. I have a small non-profit organization in Bangladesh and in last year, we have worked with over thousand patients here.