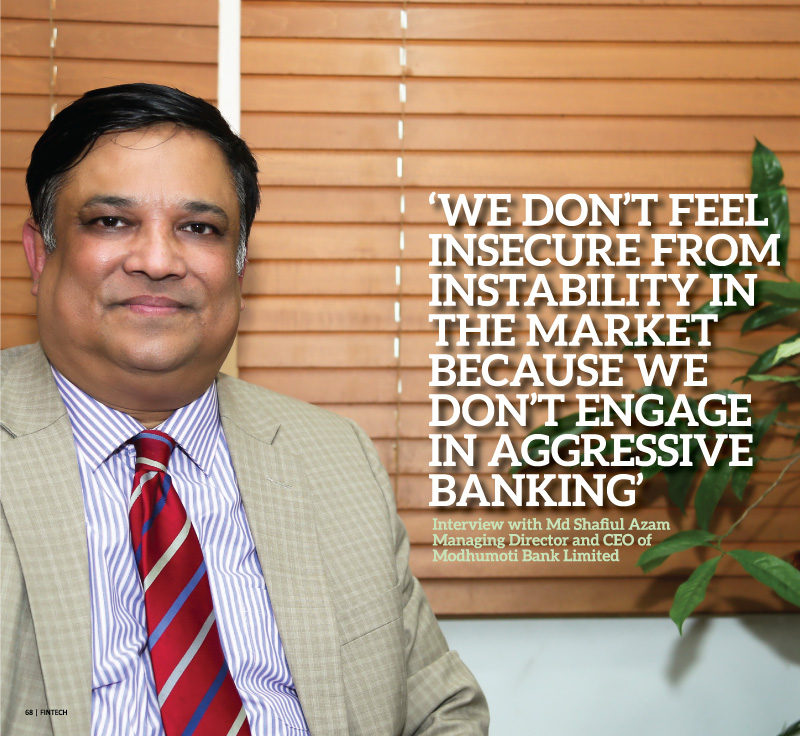 What is really the point of new generation banks, coming into being in what is considered an already saturated market? Are these sustainable? Or will they make meaningful contributions to the economy? These are only some of the questions that surrounds new generation banks.

Fintech talks to the managing director and CEO of Modhumoti Bank Limited, Md Shafiul Azam to find answers to these questions and more. A veteran banker with almost three decades of experience in the banking sector, Mr Azam brings a wealth of knowledge and expertise to his role as he takes on the challenging job of the MD and CEO. But trepidation of living up the expectations from new generation banks doesn’t seem to overwhelm the man at the helm of Modhumoti. His optimism isn’t without solid basis, as he explains in this conversation with Fintech.

FINTECH: You have been in the banking sector for over 27 years now. Talk about your career a little bit.

My banking career started in 1991 as a probationary officer in AB Bank, which was the first bank in the private sector. Even at that time we went through a systematic recruitment process. Interestingly enough, six people from that batch of probationary officers are now managing directors of different banks and NBFIs. So, I am one, there is Mr. Arfan in Bank Asia, Mr. Arif in IDLC, Mr. Khwaja Shahriar in Lanka Bangla, Mr. Kamaruzzaman in National Bank of Pakistan and Mr. Kanti Kumar Shaha in NDB Capital. All of us were in that fifth batch of probationary officers in AB Bank. By the grace of Allah all of us are now in the leading positions in six financial institutions. 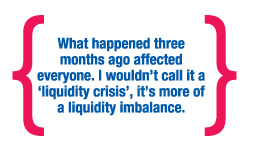 Anyways, I was in AB Bank for 10 years. I had the opportunity to work in a number of big branches during that time. After that I joined Shahjalal Islami Bank where I remained for 13 years. I joined there as AVP and left when I was DMD. I also worked as the head of corporate for about six months while I was there.

FINTECH: What has changed in commercial banking since 91?

A lot. First of all, the population has increased significantly. With new demands in people’s lives banks are churning out new products. When we started in 91, there was hardly any retail product offered by banks. There wasn’t credit card even. Although, I would say I was lucky because even then I worked in computerized environment, when the whole of the banking sector was basically depended on the traditional paper ledger book. However, AB Bank actually had online banking even then. It had a CBS. The software was called ‘Kapiti’. It connected the branches. But obviously the connectivity was quite poor as you had to depend on the TNT line then and downtime was quite frequent. We had to pack all the vouchers and papers and physically take them to the head office to process, when connection got lost. 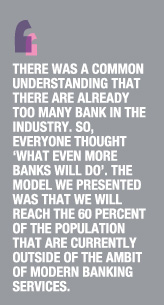 FINTECH:  As you said, population has increased. And with that one of the main focus is to reach the unbanked. What is your approach to that?

That’s exactly right. I wanted to talk about that, but you brought it up first. As you know, the new generation banks that got license – nine banks were given permission in 2013 – had to present a business model to acquire the license. There was a common understanding that there are already too many banks in the industry. So, everyone thought ‘what even more banks will do’. The model we presented was that we will reach the 60 percent of the population that are currently outside of the ambit of modern banking services.

So, we are very much focused on that vision and we are decisively opening up branches in places where no other banks have branches. Secondly, we have acquired license for agent banking and we are progressing rapidly in this area. So far, we have opened up 250 agent points. Our ultimate target is to penetrate 4,500 Unions. We have also entered into partnerships with a2i. 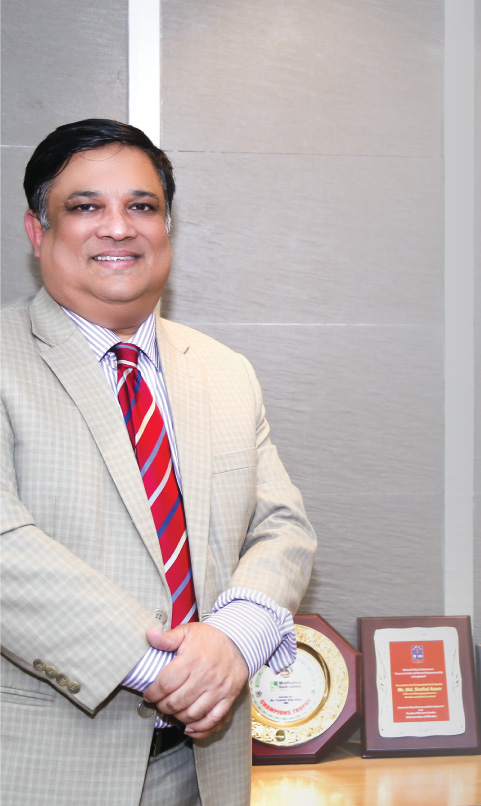 FINTECH:  What are the challenges for the new generation banks?

The market is quite saturated for the new generation banks. So, we have to constantly satisfy people regarding what we can offer customers that they aren’t getting already from the bank where they currently hold an account. This is why we focused on ‘agent banking’ first.

We also focused on utility bill collection. We have partnered with all form of utility services like Titas Gas, WASA, DPDC, etc – so that customers can pay through us. Modhumoti Bank is the only private bank that has partnered with the City Corporation. We exclusively handle the revenue collection for both South and North City Corporation. We have booths for this in Khilgaon and in Mahakhali.

We are also running an exciting pilot project in agent banking in Gopalganj. Under this we are opening approximately 20 thousand accounts for the allowances under government’s safety net. We have already opened 15 thousand accounts. People that receive these allowances are really at the grassroots level. Before they had to come to the nearby district township for collecting these. But now they don’t need to, because through these accounts they can receive the money from their own Unions. We believe this will expand more.

FINTECH:  Now that banks have access to NID, do you think more automation is possible soon?

Of course it’s possible. We do have a plan. We are planning to go into mobile banking. We will start Internet banking as well. This is currently running within a limited scope. We will broaden this so that people can create LCs from their offices. We hope to incorporate two factor authentication too.

FINTECH:  The government has big plans in IT, as you know. A part of that plan is to achieve one billion dollars in software export and one billion inbound revenue from software. Since banks are among the biggest customers of IT products, what is your view on this?

In my previous job I was the chairman of software purchase committee. I learned a lot then about IT. I strongly recommended local software then to the Board. You get a more customized product, cost is lower and much more responsive after sales service in local software.

Unfortunately though, there is a lack of proper and strong initiatives in this sector, despite its huge potential. I think the software companies have lacking in combining baking expertise and IT expertise in writing their software. 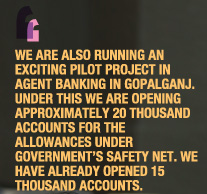 FINTECH: You have a product called ‘Goti’. This is very lucrative as you don’t require collateral here and you promise a quick approval. How quick is this and how risky is this product?

We did create this product because there is demand for it. But you have to remember that we have a fiduciary duty. We have a responsibility to those who deposit money to us. Our main product is actually in SME. We do sanction Goti loans, but with caution and very selectively at this point.

FINTECH: Which segment is strongest in your portfolio currently?

It’s mixed really. We don’t real have any one sector stronger than others. So, we are not strong in, for example textile and weaker in RMG, etc. We have a quite balanced situation. 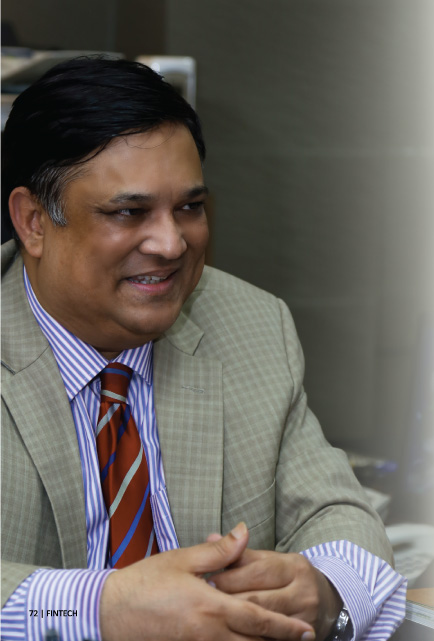 FINTECH:  You have NRB products. What is the response like there?

We are active in NRB. we have 30 branches, but 250 agent banking points. For revenue details you have to have a strong network. We are drawing good amount of remittance through the NRB segment. There have been some problems in the banking sector, some might even call it a crisis. There has been a panic even recently because of liquidity problem. How much you have been affected?

What happened three months ago affected everyone. I wouldn’t call it a ‘liquidity crisis’, it’s more of a liquidity imbalance. Because of one or two banks, a big chunk of corporate deposit has been transferred to government banks suddenly. ADR became 30 percent and in privates the ration dropped to half. Steps have been taken, as you know. As a result, privates will get 50 percent from deposit with government. This has helped us.

The CRR has also been lowered by one percent. Positive impact of these are already being seen in the market. We don’t believe and engage in aggressive banking. So, we don’t feel insecure from this really.

FINTECH: Banks have a large repository of data. Are you using it to create customized services and products?

I was actually just talking about that in a meeting right before this interview. Of course, this is necessary. What we need now is the right human resource who have the right expertise. We are taking initiatives for utilizing data.

FINTECH:  What’s ahead for Modhumoti? Where you see the bank in the near future?

Part of our future plan is that we will enter overseas operation within three to four years. We want to become a leading bank within about five-year time. Last year our profit from operation was Tk152 crore. I am immensely hopeful about where we are heading.

FINTECH:  Thanks very much for taking the time to talk to us. Thank you for talking to me.