Only five years ago, when Israt Khan Mojlish used to bring out her bike and ride on it on Dhaka roads, people used to look at her like they were seeing an alien.

Six years down the line, “a bike riding woman is a pretty common scene on Dhaka’s roads,” said Israt.

While female bike riders have increased in numbers in the cities in last five years, the countryside has them for decades. “Most of the female non-government organization (NGO) workers working in the villages across the country commute on bike. Finding a saree or salwar kameez clad bike rider is a common scene in the countryside,” said Israt.

“In cities too, we [bike riders] now show that we are not lagging behind. You have to understand that we have started riding bike out of necessity as this is best vehicle to move around,” she said.

Madiha Tamanna too believes that ‘bike is the best vehicle’ to move around. And now she finds it to be an instrument of earning extra money too.

“From December last year, I have joined Lily—an all-female bike sharing app. Aside from covering my fuel cost, it [Lily] actually now opens up a new avenue for an extra income for me,” said Tamanna. 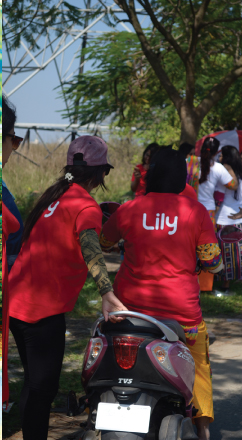 A motorbike ride sharing service “for women and by women”, Lily started its service on December 2, last year in Dhaka. Within few just months, it has gained popularity among the capital’s female commuters who for long waited for a service like this.

Shegufta Hossain, a third-year University student used “Pathao”—the most popular bike ride-sharing service in Dhaka that grabs nearly 80 percent of the market with over hundreds of thousands of registered bike riders— for few times.

She however always put a bag between her and the rider. “They [riders] are well-mannered but there is a discomfort of sitting beside a male stranger,” said Shegufta, “So when I found out about Lily, it was like a dream comes true.”

Bithi Rahman, who works in media and rides a bike also now has expressed her interest to join in ride-sharing app. “It’s convenient and gives me the scope of earning extra money.”

Banking on the need and aspiration shown by the women in city, Syed Md Saif and Shah Md Tushar had founded Lily. 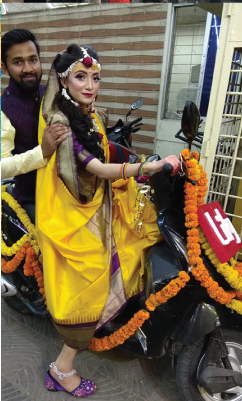 Saif, an IT professional, came up with the idea of founding it a year ago after his wife Syeda Shahida Maknun told him about the same discomfort [of sitting behind a male stranger] felt by Shegufta.

“A lot of women want to use bike as it is by far the best mode of vehicles for commuting in Dhaka”, Saif told Fintech, “It’s cost effective and most importantly it can move faster than anything else in this traffic-clogged city.”

According to a study conducted by Brac University in Bangladesh, the average speed of vehicles (car) has been reduced down to 6.8 kilometers per hour in 2015 from 21.2 kilometers per hour in 2004. Motorbikes however still can move fast as it require less road space and can gyrate its way out of the traffic It took about a year to develop and test the software of Lily. The operational procedure of it is pretty similar to that of a common ride sharing app, said Tushar, the co-founder and Chief Technology Officer (CTO).

The founders of Lily however didn’t disclose the number of riders they currently have in their system. In fact none of the ride-sharing app companies in Bangladesh have yet disclosed any data publicly since their services are not “legal” yet.

After ride-sharing facility was first introduced in Dhaka with Uber on November 26, 2016; the transport regulator— Bangladesh Road Transport Authority (BRTA)—declared it as “illegal.” 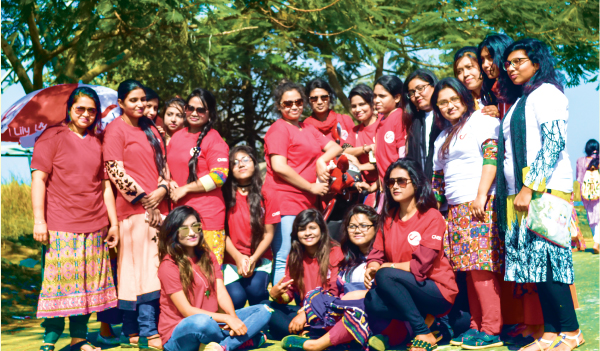 Witnessing severe public outcry about that decision, BRTA later planned to formulate “Ride-sharing Service Guidelines 2017.” The draft was prepared and was sent to the cabinet for its approval in January this year but before its enactment, the ride-sharing companies are not making their data public here.

“I can tell you that we are happy with the responses we get since our launching,” said Saif, who acts as the Chief Executive Officer (CEO) of Lily.

Saif said, since Lily is primarily a service oriented business and its success would ultimately rely on skilled riders, they have also stared Lily Training Club in where only females can avail bike riding training. “We are also getting very good responses there as well,” he said.

Imtiaz Quasem, CEO of SAM told WAD that they haven’t officially launched Pink SAM yet. “We have received large responses from female bike riders and users once we opened Pink SAM. We have started our female bike training facility in collaboration with Bangladesh Women Riders Club (BWRC). We will start the commercial service pretty soon,” said Quasem. ■