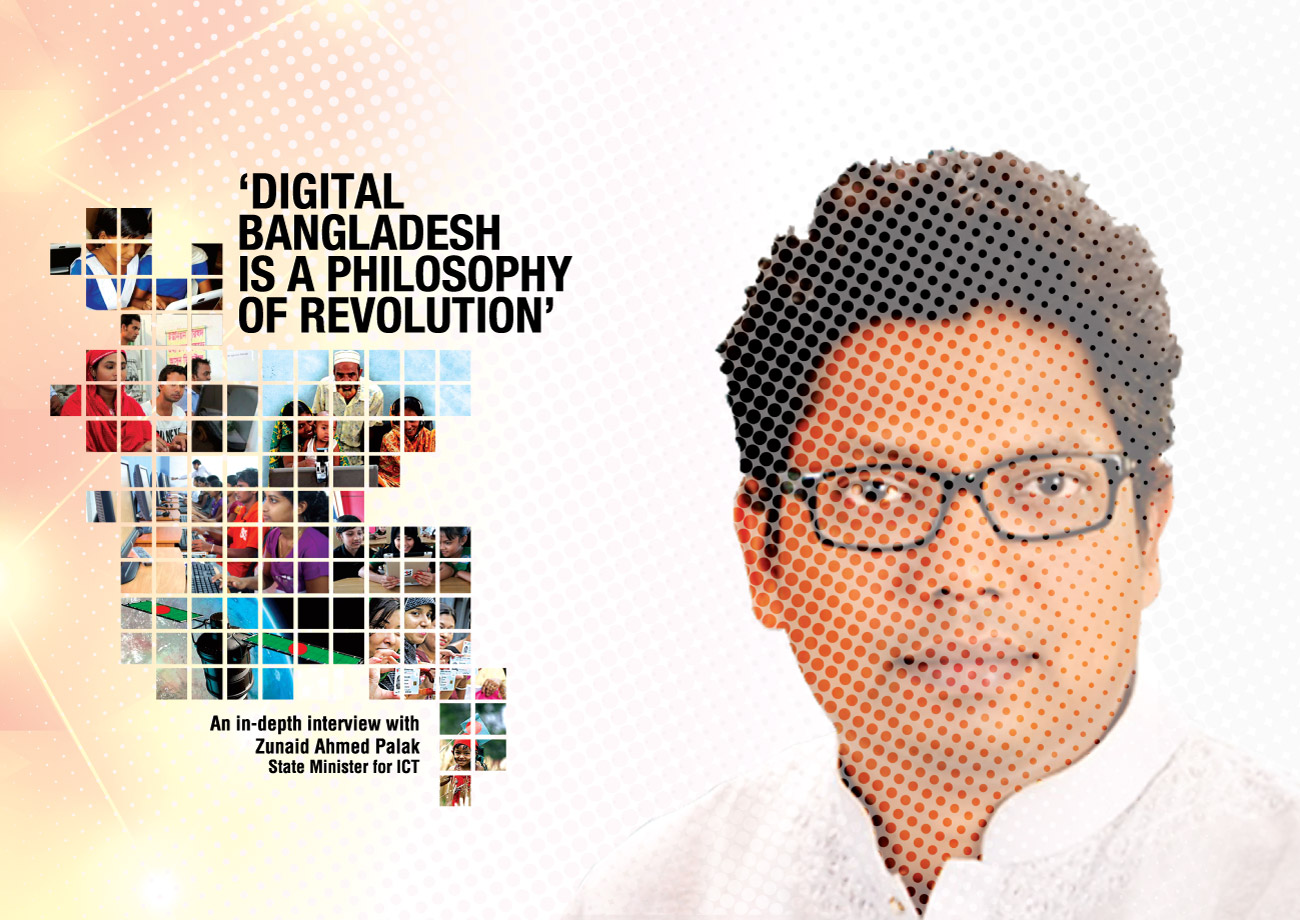 If you want to see enthralled IT entrepreneurs and tech geeks, put them in a room with Zunaid Ahmed Palak. The first thing anyone will tell you about Mr Palak is that he’s an incredibly humble and generous person. And then they’ll mention that he is a State Minister of the Bangladesh government-the youngest one.

Perhaps because of that reason, Prime Minister Sheikh Hasina gave him the charge of ICT Division at the age of 33 years and 8 months—an incredibly young age to hold such an important position—especially given the context of Bangladesh, where the policymaking positions are usually being occupied by the old seasoned oxen.

“This trend has changed in this government’s era,” Mr Palak told Fintech when Fintech team went to his office at the ICT Division for an exclusive interview, “If you look at our current cabinet, you will realize that,” he said.

This is because the Prime Minister Sheikh Hasina has a vision for creating a modern Digital Bangladesh and she knows that the vision can be implemented by our youth, said Mr Palak. “And we also have an international standard ICT advisor-SajeebWajed Joy-to implement that dream,” Mr Palak added.

During this interview with Fintech, this youngest member of the cabinet also talked about several other issues. Here is an excerpt for our Fintech readers.

FINTECH: You often start your public speeches by saying that the sound of clapping are not loud enough these days because most people have one hand occupied by a smartphone…

Z A Palak: (Smiling) Yes, I say it because it’s true. If you look around us, you will see that smartphone has literally become a part and parcel of our daily life. I think it’s great because I am that sort of a person who welcomes the emergence of new technologies with both an open mind and open arms.

It is also important to note, I think, that this has been possible because in the previous term of the Awami League government, the honourable Prime Minister Sheikh Hasina in 1996 initiated the deregulation through ECNEC which made the spread of mobile phones possible.

FINTECH: What do you believe has triggered this digital revolution in Bangladesh?

Z A Palak: A lot of things actually but first and foremost I would like to mention about an able and visionary political leadership. Never had been in the history of Bangladesh, a political leadership considered IT as a vehicle to drive towards prosperity; but this government did it from the very onset. Giving pre-election pledge after a fashion is one thing but abiding by it with determination and honest intention is another one. The good thing is this government walked its talk and gave it all for truly building a Digital Bangladesh.

Then I have to give credit to our private sector entrepreneurs. They have come forward with great initiatives and set up innovative IT entrepreneurships. These initiatives give the country’s youth the necessary impetus to pursue for a career in IT. This young and enthusiastic population is a big asset for Bangladesh. Bangladesh since 2007 has had more people of working age than non-working, known as demographic dividend. Now, more than 65 percent of the population is of working age, between 15 and 64. This young working force is tech savvy and they want jobs in the IT sector. I think that’s obviously has worked in achieving a considerable digital progress in the last few years.

FINTECH: Can you shed some light on the ‘digital progress’ made by Bangladesh in the last few years?

Z A Palak: The list wouldn’t be a short one. First of all, to create a Digital Bangladesh, the government first itself needs to be digitalized. And it does that. The government has taken up programs like Info Sarkar and BanglaGovtNet, under which it has been able to connect 18,132 government offices to moderate transportation. Bangladesh Secretariat and many other Government offices have come under the WiFi coverage and digital security measures. 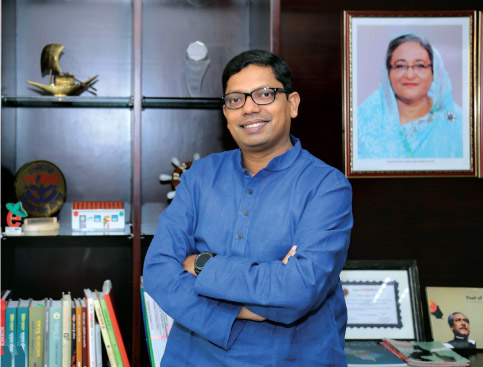 After that comes the digitalization of the education sector because if the culture of digital education is not being implemented from the very beginning of the academic career of a student, his/her mind couldn’t be fashioned with a digital mindset. So, with that in mind, we’ve already established 6,000 digital labs in our secondary schools and 15,000 more are in progress.

We’ve developed interactive digital contents for our primary students and installed more than 25,000 smart classrooms and a number of e-learning sites. Besides, a proposal for a new policy will be tabled before the government soon, which will aim to bring the education system under a digital framework. The policy will be implemented with a short-term goal by 2021 and a long-term goal by 2041.

FINTECH: You have talked about digital governance and digital education. Do you think these will help creating a digital workforce with which the country can attain economic progress?

Z A Palak: Thanks for asking that. I believe it to be a very pertinent question. One of the important initiatives that we have taken from the government is to make the whole ICT education system more industry and job oriented. We believe in creating an able and ready workforce, thus realistic education is very important. So, from the ICT Division, we have been facilitating many programs and trainings to the youngsters to lead the IT industry in the future.We are providing freelancing training to a huge number of youngsters to make them proficient in earning to create self-employment.

Now just to give you a picture with some numbers–we’ve already created jobs for 7 lakh youths. We’ve initiated a ‘Learning and Earning Online Outsourcing Training’ for 50,000 students. Around 13,000 students have received the training and they’re now earning a significant sum of foreign currency through outsourcing. We’ve also taken a project for providing 35,000 IT graduates with top-up training to make them ready for the IT sector. Our target is to create jobs for 20 lakh youths in the IT sector.

We have also worked out a pyramid structure for devolving human resources for the IT sector. Some innovators and entrepreneurs will be there on top of the structure. I strongly believe there are some potential youths who will turn successful entrepreneurs if we can properly nurture and support them.

FINTECH: You have been very determined about the prospect of making Bangladesh a top IT outsourcing destination. How realistic is that goal?

Z A Palak: Very realistic indeed. There are over 1,000 IT companies here while 3 lakh people are directly involved with it. We’re currently earning nearly $800 million by exporting locally-made software and other ICT-related products. We have a target to cross $1 billion export volume by 2018 and $5 billion by 2021.

Now to achieve that target, the government has taken several initiatives. Bangladesh Computer Council (BCC), as a part of the World Bank financed Leveraging ICT for Growth, Employment and Governance (LICT) Project, has launched a six-month extensive training to provide training to 10,000 youngsters on online outsourcing. We are also planning to provide facilities to train people in high-end software development. Our target is not to breed a generation of freelancers. We want the next Silicon Valley to happen here. For that, we need to keep our best talents from going abroad.

So to keep them in Bangladesh and give them appropriate place for research and development, we are planning to establish an Innovation Design and Entrepreneurship Academy. We are working with the Bangladesh Association of Software and Information Services to design the academy. At this academy our software engineers will be provided with trainings to design new innovative products.

One of the most important things in IT outsourcing obviously is the access to fast internet. The government is now planning to set up broadband connectivity at 2 lakh points across the country. These 2 lakh points have been fixed after conducting several studies. Broadband connectivity at these points will ensure high-speed internet coverage up to the union level. Needless to say I think, this didn’t happen automatically. It happened because of the right decisions we took and right policies we adopted.

FINTECH: IT startup is very important for IT development goals. What initiatives you are taking to facilitate that?

Z A Palak: We are very cognizant of creating all the necessary avenues to facilitate tech startups. We have initiated a program called Innovation Design & Entrepreneurship Academy or IDEA. The implementation work of IDEA is in progress to create the new products and services by assisting the information-technology based innovative, creative youths by way of seed fund and venture capital and through the research and development.

ECNEC approved the project on September 5 this year. The implementation of the project will require the expenditure of Tk229.74 crores. The IDEA project will work on bringing the startups, established entrepreneurs, researchers, government officials, business leaders, consultants, students and others under a single umbrella. 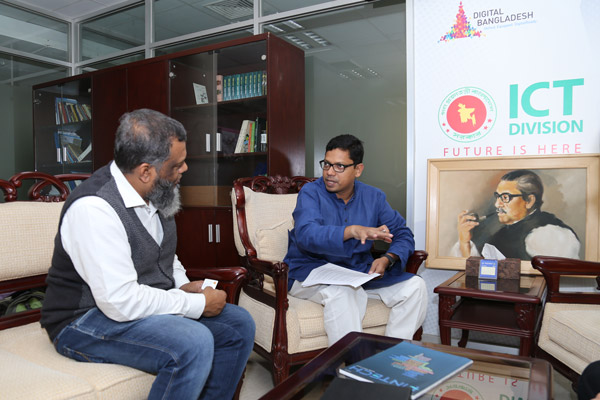 FINTECH: One of the most talked about hindrances of the IT outsourcing was to bring payment from outside. Do you think it has been solved now?

Z A Palak: Yes, there is no doubt that bringing payment was a problem and the IT freelancers had long been suffering with the mode of payment. They have used roundabout ways to bring home their foreign currency earnings – i.e. use someone else’s account abroad – which are both risky and costly. Now the Xoom service of PayPal is launched in the country to aid our freelancers in receiving money from outside.

There was some confusion about the PayPal service in Bangladesh. Let me clarify you on this. PayPal has lots of features such as money transaction, e-wallet etc. But, we have considered what we need. We found that inbound cash transfer is required more than outbound. That’s why Bangladesh Bank has allowed receiving money through PayPal account via nine local banks. The service will be made available soon with more banks.

Z A Palak: Bangladesh embraced the changes in the financial technology sector long before the arrival of PayPal. We have success stories like bKash here which is basically moving the country away from a cash-based economy and is making real progress in reaching out to the unbanked – which make up about 85% of the country’s population.

Having said that, I believe over the next 10 to 15 years, the emerging technologies of today will completely reinvent the entire industry. Bangladesh still has to walk miles to adapt well with the challenges ahead. But I strongly believe that with honest intention and able leadership we will cope well the changes lie ahead. Digital Bangladesh not only a slogan for us, it is a philosophy of revolution. ■

One thought on “DIGITAL BANGLADESH IS A PHILOSOPHY OF REVOLUTION”