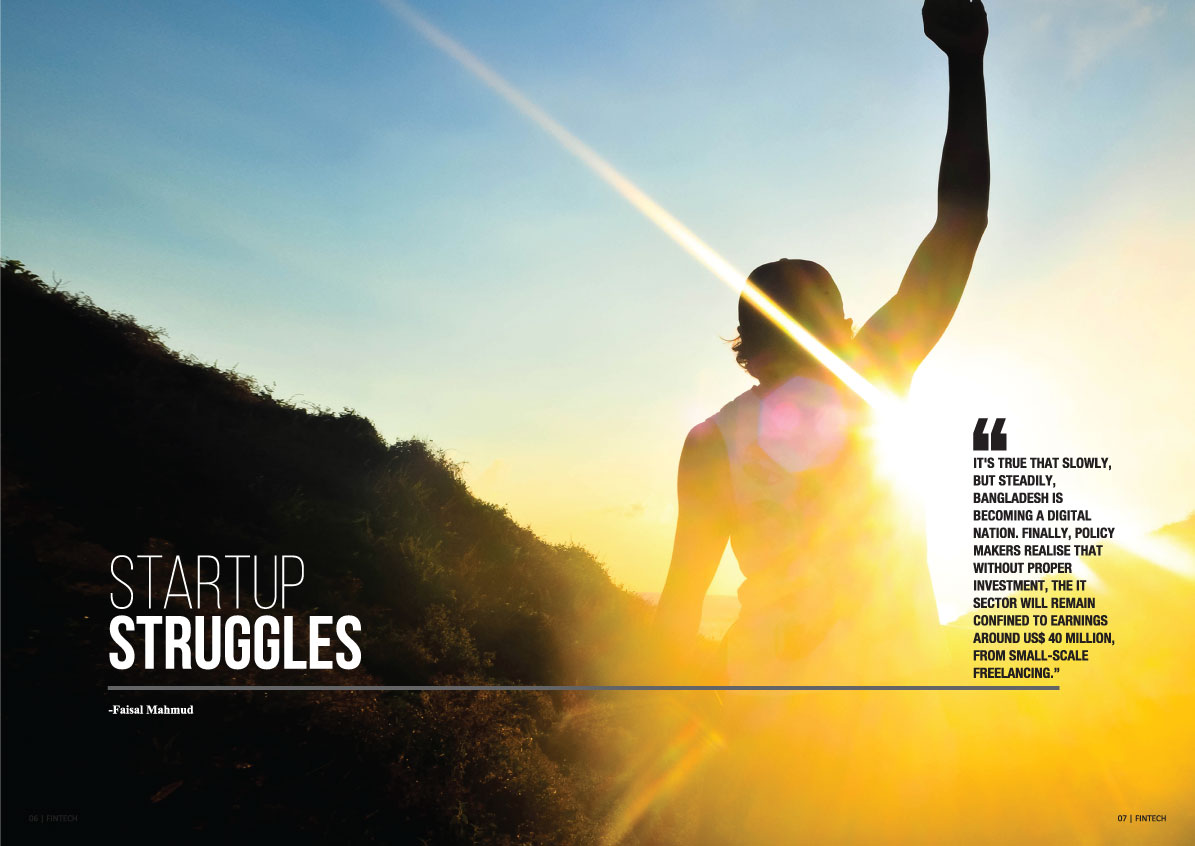 The people who gathered at the grand ballroom of Dhaka’s Radisson hotel on a sunny morning of March 18, 2016 had a nomenclature of their own.

A common person could have easily felt alienated as words like ‘VC’ (venture capitalist), ‘Fin Tech’ (Financial Technology), ‘B2B’ (Business to Business), and ‘Accelerator’ (a place where new startups get incubated) flew thick and fast there.

It was the second instalment of ‘Innovation Xtreme’-a program organized to bring all of the major tech startups of Dhaka, the very few VCs and industry experts under one roof. The first one was organized back in December 2014. 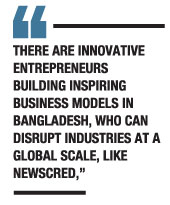 uring the second instalment-the SD Asia, organizer of the event was able to bring 25 local startups, six local and two foreign VCs and 25 renowned industry experts in one room.

In that one-day event, the potential of existing innovators and entrepreneurs in Bangladesh was showcased. A good number of one to one sessions between the startups and the VCs were held and a grand buffet lunch was served at the end.

That event of stupendous scale (by startup standards) was obviously a success-in terms of discussions, one-to-one sessions and matchmaking attempts. If the outcome of the whole event was being measured in numbers, the number –‘1’- popped up as it was the number of successful matchmaking between the startups and the VCs that had happened through that event.

Success or not, in the last two odd years, the word ‘startup’ has somehow become a buzzword in Dhaka, especially in the information and communication technology (ICT) sector where the young tech professionals started to prefer entrepreneurship over salaried jobs.

By definition, a startup company or startup is an entrepreneurship or a new business in the form of a company, a partnership or temporary organization designed to search for a repeatable and scalable business model.

In simpler terms, a startup is a new small-budget company designed to scale very quickly. It is this focus on growth unconstrained by geography which differentiates startups from small businesses.

The term became popular internationally during the dot-com bubble and when a great number of dot-com companies were founded. In Bangladesh, it became popular with the increasing popularity of internet and social media which engineers the interest among the young generation to popularize the concept. There is no doubt that with a number of promising tech startups like NewsCred, Chaldal.com, Strategeek Digital & G & R Ad Network, young entrepreneurs of Dhaka have already proven their worth.

But if the success of Dhaka’s startups has to be measured in global scale, then the realization comes that the startup scenario in Dhaka is still in its very nascent phase. It has potential though, as believed by the pioneer of the tech startups here.

Fayaz Taher, an angel investor currently based in Bangladesh said that the investment scenario in Bangladesh is evolving, as more and more sustainable businesses are coming into play and high net worth individuals locally are getting attracted to the ecosystem.

About angel investment, Fayaz Taher said that it is a viable funding option for startups in Bangladesh, where startups can find an angel or a group of angels here to purchase equity of their company, and get not only monetary funding, but also an invaluable rolodex of contacts and priceless experience and knowledge.

Traditionally, the country saw investments from friends and family but now there is an informal, local angel investment network which mainly invests in tech startups within the range of US$10,000 to US$50,000.

“There are innovative entrepreneurs building inspiring business models in Bangladesh, who can disrupt industries at a global scale, like NewsCred,” he said. Newscred is a leading startup founded in Bangladeshi that raised $25m in investment.

Problem lies in finding the investors

Taher said the problem with tech start-up here is that it’s still hard for the entrepreneurs to convince the large investors for investing in the tech start-up. “I came from the industry background and I have business in leather and food industries. When I started to invest in IT sector and reaped the benefits from it, others too got interested,” he said.

He said that the government should provide a tax break for investing in startups and there should be a separate tax policy for startups with a clear and well-defined definition of a startup entity. The registration  process should also be eased.”

Taher who is also a co-founder of SD Asia, a tech news website and a platform for the local start-ups said that now in Dhaka, there are a host of organizations dedicated to the nurturing of startup ideas.

“SD Asia creates a platform where future entrepreneurs can come and discuss about their ideas. It provides the opportunity to young entrepreneurs to learn from the seasoned ones,” he said.

from SD Asia, groups like Desperately Seeking Entrepreneurs (DSE) were formed where a potential startup could seek advice, present ideas and follow up on the critique.

DSE also helps minimizing time and effort in looking for professionals and personnel for hire, through a system of referrals.

Samad Miraly, a Canadian-Bangladeshi investor who has investments in several tech startups said being an entrepreneur should not be a goal. Neither should ‘getting funded.’ “These are not in and of themselves valuable. What is valuable is solving a problem.” He said that a problem can easily frame goals: Defeat the problem. “It’s that simple. It is that drive that pushes people to create valuable companies and unseen problems that push the boundaries of innovation. Instead of wanting to be an entrepreneur, fall in love with a problem.”

“To date, I have invested in 5 startups in Bangladesh, All of them were born from a clear problem,” he added. About raising funds for the startup, Miraly said that there are various ways for raising fund for startups. One of the most popular ways is crowd funding. “Crowd funding on the Internet is yet to receive popularity in our country but traditional crowd funding where we seek money from our relatives and friends has been -and continues to be practiced.”

“There’s more to funding startups than just money. You also need people with expert opinions to guide you in the initial stages of starting out which is not available through crowd funding.”

Meanwhile, the young entrepreneurs who want to create their own startup said that a good network is very crucial to build a successful business. Sakib Jamal, co-founder of Drink Enterpreneurs, another startup said that it’s easy to get connected via facebook or linkedIn. But networking just doesn’t only mean getting connected.

He said that there are a number of ways we aid the startup community in Dhaka. “The most obvious one being that we provide a platform for both local and international founders/professionals to network, collaborate and share ideas. We also partner with a number of organizations if they need to communicate a certain program.”

“Recently, we partnered with SD Asia to promote the GP Accelerator program, as well as Orinus Partners Japan to brand Link Business Collaboration Platform,”, he added.

What the industry leaders say?

Shamim Ahsan, former president of Bangladesh Association of Software and Information Services (BASIS) said that the potential of Bangladesh as an information technology (IT) destination is immense.

He said Bangladesh has the most taxand investment-friendly policy regime in the region and the IT investment cost of other countries (India, China and the Philippines) have increased manifold in recent times.

Shamim however identified a common problem in the startup scenario. He said that most people get so excited about entrepreneurship that they tend to forget about financial due diligence and regulatory barriers for their potential business. “So we see a lot of new businesses spring up but these can’t sustain themselves in the long run,” he pointed out.

He said financial due diligence and understanding the regulatory barriers is as important as the business idea itself. “Suppose most of the foreign VCs don’t want direct equity of a Bangladeshi startup. They want the company to register outside. There are regulatory barriers for that,” he explained.

Shamim reminded that Apple recently invested USD 1 billion in Vietnam. “They invested that amount in a country whose population is half the size of Bangladesh and they are not even technologically superior to our country. We have to ask ourselves what Vietnam has done right to get that,” he said.

He also said that without large capital, investment, and stock market provisions, the IT sector of the country cannot be taken to the next level. Specialized tech company-based stock exchanges, like Nasdaq, helped the likes of Apple, Microsoft and Intel to become what they are today.

These tech giants used Nasdaq, early on, to raise much-needed capital in a timely manner. It enabled them to go on to become billion-dollar enterprises and created the era of multi-billion dollar tech companies, said Ahsan.

“It’s true that slowly, but steadily, Bangladesh is becoming a digital nation. Finally, policy makers realise that without proper investment, the IT sector will remain confined to earnings around US$ 40 million, from small-scale freelancing.”

“We want to bring large foreign investors, as well as large Silicon Valley company’s, to invest in Bangladesh. This will boost the overall investment scenario in the country,” said Ahsan.

The former BASIS president said that the process to bring Silicon Valley funds to Bangladesh’s IT sector began in March 2013, when a two-day long investment conference on the tech sector in Bangladesh was organized in California.

The conference, titled ‘US-Bangladesh Tech Investment Summit’, was jointly organized by BASIS and the Indus Enterprise (TiE) Global of Silicon Valley. Shamim Ahsan, the then senior vice-president of BASIS and CEO of Akhoni.com, the first e-commerce and online marketing website in Bangladesh, was the convener.

“During the summit, we realized that many western companies now find that it is lucrative to outsource different IT and technical jobs to countries like Bangladesh. There is a US$ 2 billion industry right in front of us, and, so far, we have been able to hit only the US$ 38 million mark.”

After that, Ahsan consulted Sajeeb Wazed Joy and planned to bring the Silicon Valley investment here. “We have successfully organized the digital investment summit. The process to allow foreign mutual fund investment in the stock exchanges is on. As soon as it starts to function, the whole IT sector will enter a fast lane of prosperity.”

Sajib Wazed Joy said during the Digital Investment Summit that the government is working to allow foreign mutual funds in Bangladesh’s capital market, in order to increase the foreign direct investment (FDI) in the IT sector.

“We are working with the Security Exchange Commission (SEC) to streamline the existing policy, so that foreign venture capitalists can come in, make a profit, and exit. We’re trying to promote this investment model to provide capital to the market,” said Joy.

Usually, an IT start-up in Silicon Valley doesn’t have adequate capital to expand, because it can’t come up with collateral. Hence, banks are usually not interested to finance them. So, they approach venture capitalists, raise funds, and expand the company, said Joy.

“In Bangladesh, most of the capital is limited to the domestic market. That capital is invested in the capital-intensive industry. Those who have capital here, don’t want to invest in the IT sector, or in a sector that involves intellectual property rights,” he said.

The ICT adviser to the Prime Minister said that there are lots of Bangladeshi expatriates in the Silicon Valley. “There has been a tremendous interest among them to visit Bangladesh and to invest in the country’s IT industry,” Joy said, adding that there are lots of Indians in Silicon Valley, who are familiar with the region, as well as the market, and they, too, want to invest in Bangladesh.

“But we have to remember that the journey of tech-startups is not an easy one.”