Let’s anticipate a simple calculation – You work 4 hours daily as a typical computer user. Your typing speed is 200 keystrokes/min assuming 2 inch average finger movements per keystroke. Guess what? – You literally walk 1.5 miles each day on your ‘fingertips’. How far you walked on foot today?

With the same typing speed, you press 12,000 keys per hour or 48,000 keys per 4-hour day. If approximately 8 ounces of force is necessary to press one key, it is almost 10 metric tons of force to be exercised by your fingers today. This is the amount of stress you put on your hands on a regular workday.

Mr. Bashar- a high potential software developer working in a multinational organization was quite happy with his work, until one night when he noticed a small twinge of pain in his right shoulder. At first he didn’t worry much thinking it was just a shoulder sore may be occurred while swimming the other day. The pain kept worsening day by day. After about 2 weeks or so he started taking massive amounts of ibuprofen to mask the pain. Little did he understand at this time how bad the pain was going to be. Later it was diagnosed as ‘mouse-shoulder’caused by excessive mouse and keyboard use at wrong posture. 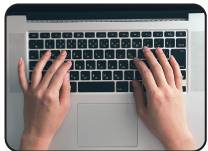 Repetitive strain injury (RSI) is a general term used to describe the pain felt in muscles, nerves and tendons caused by repetitive movement and overuse.The condition mostly affects parts of the upper body, such as forearms and elbows, wrists and hands or neck and shoulders. Tendonitis and
Carpal Tunnel Syndrome are quite common among computer related RSI’s. 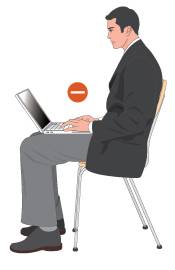 RSI is related to the overuse of muscles and tendons in the upper body. Certain things are thought to increase the risk of RSI, including:

Preventing RSI is the first step to a safe workplace

Ranging from mild to severe, RSI symptoms usually develop gradually. They often include: pain, aching or tenderness, soreness, stiffness, throbbing, tingling or numbness, coldness, weakness or cramp. It may start as a mild symptom that gradually and eventually become constant and cause longer periods of pain. Swelling in the affected area can last for several months and deteriorate further without proper intervention.

What to do when you suspect RSI

If you suspect RSI related to your job, speak to your employer and medical or occupational health representative. It may be reversible and possible to modify your tasks improving your symptoms. HR also can assist you to choose reasonable work accommodation. See your physician if symptoms persists even after change in work pattern.

Treating RSI usually starts with identification as well as modification or termination of the task causing the symptoms. Preventing RSI is the first step to a safe workplace.

“RSI” is a mechanism of injury, not a diagnosis. Prognosis varies immensely from person to person. Healing may take months, even years. DON’T GIVE UP!!! Heat and cold pack, support therapy (splint, elastic bandage etc.), anti-inflammatory or pain-receptor blocking medications may be helpful but need to be under clinical supervision. Sometimes steroid injections or surgical interventions can be valid options. Such cases are often referred to physiotherapists.

Other treatment include- Exercise- Some people with symptoms of RSI find that including exercise in their daily routine, such as walking or swimming, also eases their symptoms.

Complementary therapies and relaxation technique- yoga, meditation, acupuncture, etc. However, while some people with RSI do find these helpful, there’s little scientific evidence to suggest these approaches are consistently effective for RSI.

The word ‘ergonomics’ is derived from the Greek words ergon(work) and nomos(natural laws). It means the laws of work. Ergonomic workstation is the required adjustability to achieve an ergonomically correct computer workstation.

“Adjusting and setting up desk equipment to your specifications is the first step in preventing RSI”. 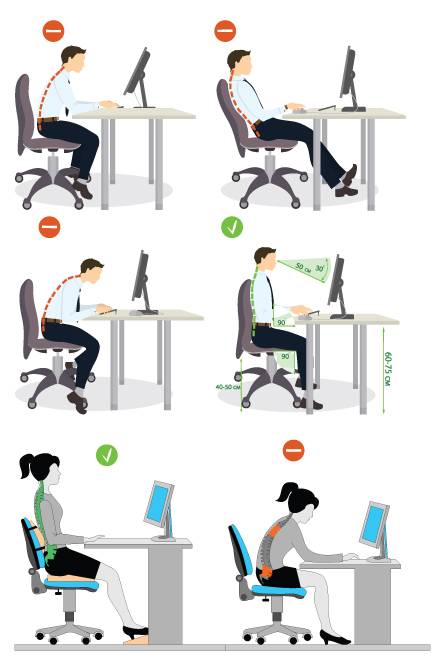 Your feet should be flat on the floor with your knees at a 90 degree angle. Your seat should not be pressing into the back of your knees; if necessary, tilt it slightly forward to alleviate any knee pressure. Sit fully back in your chair, with your back and shoulders straight and supported by the back of the chair.

When typing, your wrists should be in line with your forearms and not bent up, down, or to the side. Your keyboard should be directly centered in front of you. Leave a gap of about four to six inches (100mm-150mm) at the front of the desk to rest your wrists between bouts of typing. Position and use the mouse as close to you as possible. A mouse mat with a wrist pad may help keep your wrist straight and avoid awkward bending. Use keyboard shortcuts and other key features instead of the mouse to navigate and execute commands. Other frequently used items should be nearby, within arm’s reach.

Your screen should be as glare-free as possible to avoid eye strain. Adjusting the screen’s brightness or contrast can make it much easier to use. Position the monitor to avoid reflection from overhead lighting and sunlight. If necessary, pull blinds across the windows. Rest your eyes for 15 minutes after two hours of continuous computer use. Also, for every 20 minutes of computer viewing, look into the distance for 20 seconds to allow your eyes a chance to refocus.

Take regular breaks. Don’t sit in the same position for long periods. Short, regular breaks can help prevent RSI.Stand up and a few steps walk at intervals will reduce fatigue and improve blood circulation. Breathing exercise is a very good way to alleviate your stress.

Avoid phone strain. If you spend a lot of time on the phone, try exchanging your handset for a headset.

– In the industrialized world, the incidence of musculoskeletal injury (MSI) has reached epidemic proportions. In the United States, these disorders affect one out of every four people (American Academy of Orthopedic Surgeons, 2000).

– According to the National Institute for Occupational Safety and Health (NIOSH), MSI (musculoskeletal injury) account for one-third of all job-related injuries.

– Ergonomic disorders are the fastest growing category of work-related illness. According to the most recent statistics from the U.S. Bureau of Labor Statistics, they account for 56 percent of illnesses reported to the Occupational Safety and Health Administration.

– According to the U.S. Department of Labor, Occupational Safety and Health Administration (OSHA), repetitive strain injuries are the nation’s most common and costly occupational health problem, affecting hundreds of thousands of American workers, and costing more than $20 billion a year in workers compensation.
– According to the U.S. Bureau of Labor Statistics, nearly two-thirds of all occupational illnesses reported, were caused by exposure to repeated trauma to workers upper body (the wrist, elbow or shoulder). One common example of such an injury is carpal tunnel syndrome.

RSI may be worse than you think. Prevent it before it causes permanent DAMAGE.

Last but not the least…

RSI may be worse than you think. Preventy it before it causes permanent DAMAGE